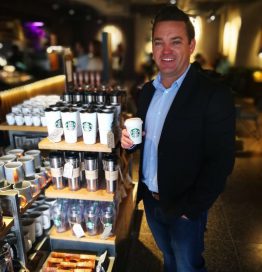 Clive Liversage is a Managing Executive at Taste Holdings, Starbucks geo-licensee, where he is responsible for the strategic development of the Starbucks brand and operations.

As a Chartered Accountant, he served his articles and qualified with KPMG in 2002. At KPMG, Clive was employed as Audit Senior before he ventured into the import and export industry in 2005, working for UTi as General Manager Africa Exports and then as General Manager of the supply chain arm of Trafigura, commodities trader, Impala Africa.

He joined Taste Holdings in 2013 as the Managing Executive of Taste Housings’ supply chain business, Buon Gusto. In early 2016 Clive moved in to the Finance Executive role for the Food Division and was later appointed as Managing Executive for Starbucks in 2017. Under Clive’s guidance, Taste have opened 10 Starbucks stores, launched a successful loyalty programme and invested in driving coffee passion through employment and training of store partners.

He is passionate about people and excited to be part of the vibrant and fast growing coffee industry!