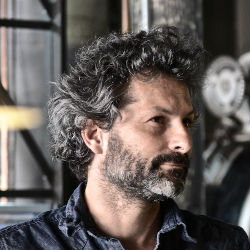 David is a bit loud. He has made a lot of noise moving boring commodities to becoming brands in the last 25 years. From eggs to coffee.

A lot of Coffee. In fact his company, Truth Coffee Roasting’s Cape Town Cafe was called the best in the world by a prominent UK Newspaper or two.

He has learned some lessons along the way, that a good product is seldom as interesting as a company with good ideals and philosophies that happen to make good products. He loves Strategy. Probably from living his life more intellectually than emotionally.

He also spends a stupid amount of time on bicycles, talking about bicycles, as a bicycle advocate. Digging up and holding onto mostly useless facts. He loves driving brilliant cars hard, sometimes to the point where he runs out of talent. He Loves his family, his home, his life, his city, Cape Town, Africa, Land Rovers, Fast Cars, nerdy bikes, is slowly admitting he is a weight weenie. He has waged a personal war on carbs, except for once a week when he stuffs himself full of cheap crap chocolate until he doesn’t want to ever again or for at least another week. Most people would be shocked to learn he is an introvert.