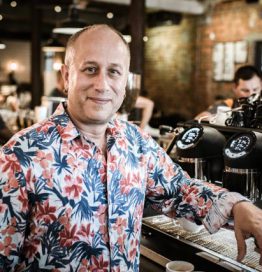 Born in Montréal, Quebec, studied further west and in France, then moved to the mountains and ocean of Seattle. “While working in IT at Microsoft, I instead fell in love with the beauty and amazing possibilities of all things local – coffee, food, wine, beer, baking, craftsmanship – and with the possibilities of renewed urban living and neighbourhoods. Cape Town became home and I was inspired to contribute to the burgeoning of Cape Town city life and the “artisan” scene. I remain inspired by coffee, by people and by travel in the world at large… 40+ countries under my belt so only another 100 or so to go.”

Origin was established by Joel Singer in 2005. He wanted to offer South Africans exceptional, quality roasted coffee from around the world. Ten years later, this pursuit continues. Origin is considered by many to be the godfather of artisan coffee in Cape Town – if not the whole country.

“I’d like to think I and the rest of the team at Origin were responsible for the launch of the artisan coffee revolution in Cape Town and South Africa. I feel that we are still at the bleeding edge, continuing to drive its ongoing development, pushing the boundaries to bring us to a truly world class level.”