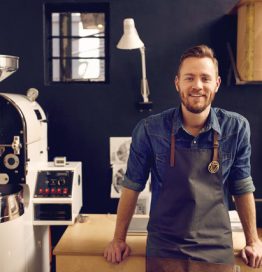 Jono Le Feuvre is the co-founder of Rosetta Roastery,  a specialty coffee roastery in Woodstock, Cape Town. In his earlier years, Jono spent his days as a freelance journalist, writing for magazines like Men’s Health, GQ, FHM, and SA Sports Illustrated (back when print media was still a thing). This was, of course, when he wasn’t précising episodes of The Young & the Restless for the prestigious tvplus magazine. While his writings covered multiple topics, ranging from “Your Ultimate Metrosexual Winter Grooming Routine” through to “How to Write about Things that Really Matter”, it became painfully obvious that all he could think about was from whence his next caffeine fix would come.

Despite nigh-on divine levels of editorial tolerance, there came a time (in the winter of 2009) when all of his various magazine editors could no longer stomach his incessant pitching of coffee-related story ideas, and they collectively suggested that perhaps it was time he stopped writing about coffee, and started roasting it. Thus, in 2010 Rosetta Roastery was born. In 2018, Rosetta Roastery was named “Best Coffee Roastery in South Africa” by the annual National Coffee Magazine Awards.

When Jono isn’t roasting, brewing, sniffing or spitting coffee, he occasionally dabbles in a bit of wine journalism.