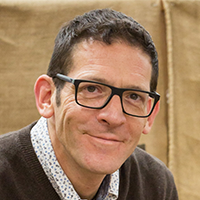 Jeremy Torz is the Co-Founder of Union Hand Roasted coffee, along with his partner Steven Macatonia.

Jeremy & Steven founded their first coffee roasting company in London in 1995 after 4 years living in California.  The ripples then spreading out from Seattle inspired their food and drink passions and they began roasting just ahead of what would turn out to be the beginning of the UK speciality coffee scene’s development.

By 1997, their company was supplying the UK’s leading chefs, fine food retailers and was an early adopter of internet based mail-order. Torz & Macatonia Gourmet Coffee Roasters had also grown to be a key part of Seattle Coffee Company, the UK’s leading coffee chain that in 1998 was acquired by Starbucks to enter the UK market.

Jeremy & Steven left Starbucks two years later to once again explore coffee on a personal level and to see how a 21st century business could relate to coffee producers and consumers in a new and different light.  Union Hand Roasted Coffee became their answer and commenced operation in August 2001.  Union Hand Roasted Coffee has worked to define and embody values lead sourcing principals, making these a key aspect of the brand DNA and its connection with its customers and farmers alike.